As part of the Bochasanwasi Shri Akshar Purushottam Swaminarayan Sanstha's multifarious socio-spiritual activities, Satsang Examinations have been playing a fundamental role in enriching and enlightening thousands of devotees, young and old, with the knowledge of Vedic, cultural and Satsang values. Once the dream of Yogiji Maharaj, was transformed into a reality by H.D.H. Pramukh Swami Maharaj. This activity both spiritually and intellectually encompassing has spread vastly since 1972.

The Satsang Examinations started with just 56 centers at its inception in 1972. Today it has exponentially grown and spread to 1550 centers globally. Thus far, 500,000 people have appeared for the annual twelve-tiered Satsang exams.

The first exam, Bal Satsang-1, caters to children and over a period of twelve years ultimately culminates to Pragna-3, which is equivalent to the post-graduate level. The examinations are prepared, administered, and scored with strict academic standards and disciplines. The exams in India are held annually in July whereas in the overseas centers such as USA, Canada, UK, Europe, Far East, Australia, New Zealand, Middle East and Africa conduct the exams in March each year.

The exam papers are offered in three different languages: Gujarati, Hindi and English.

After passing the Pravin Satsang exam, candidates are eligible to move forward to the Pragna Satsang exams. This postgraduate level course comprises of Pragna 1, Pragna 2 and Pragna 3. Each exam has two parts: Paper 1 and Paper 2. Candidates can appear for both papers in the same year or sit for them over two separate years - a maximum of 1 years apart. Thus, if a candidate appears for Paper 1 in year 1, and passes, he must take Paper 2 by second year.

Candidates who take the Pragna Exam papers 1 & 2 separately must score a minimum of 45% in each of the papers to pass. Paper 2 can only be taken if Paper 1 has been successfully completed.

Candidates who take for both papers in the same year must score a minimum total of 45% to pass. Pragna exam completion certificate is awarded when the examinee successfully completes both papers. 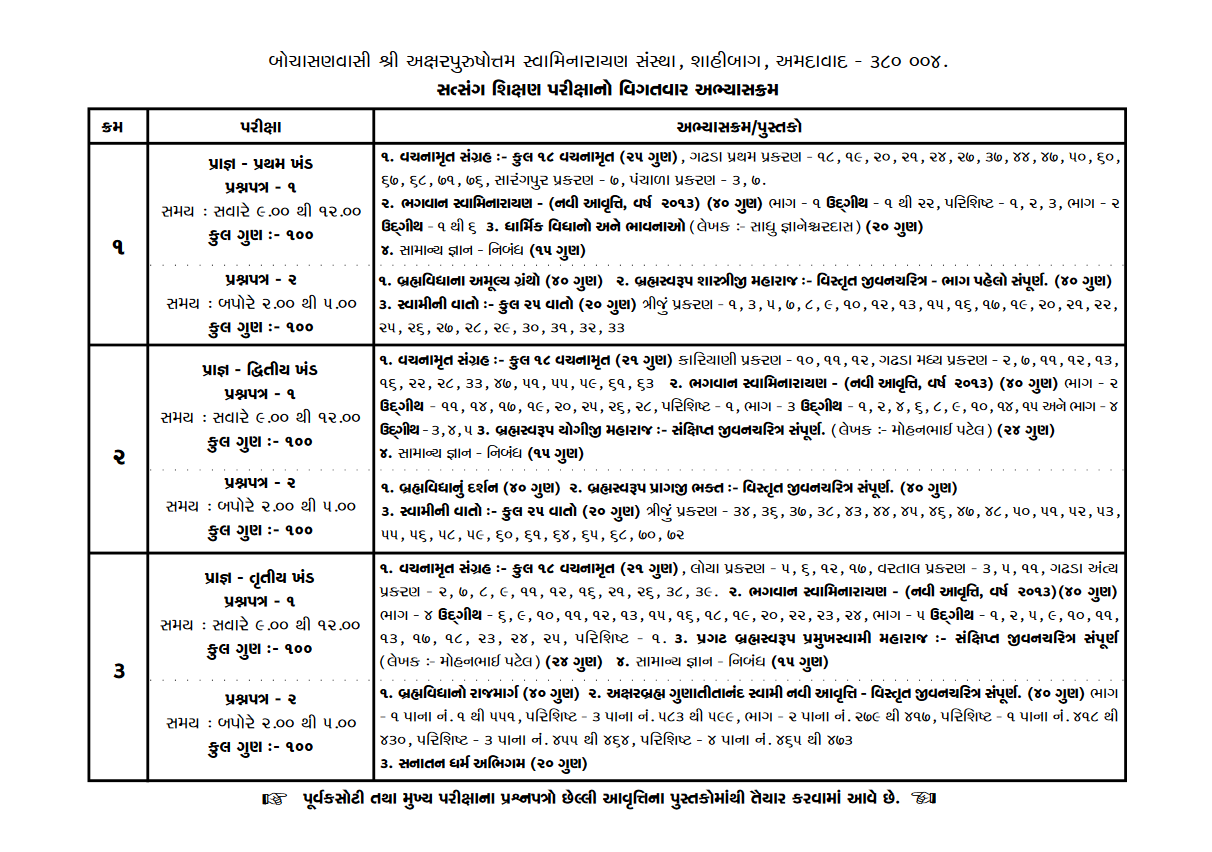